The Law Society has today echoed calls for a clampdown on so-called ‘lawfare’, but warned of ‘unintended consequences’ if reforms are not properly thought through.

Responding to the government’s March consultation on strategic lawsuits against public participation (SLAPPs), Chancery Lane stresses the importance of clarity over exactly what a SLAPP is. ‘Before exploring the issue,’ said Society president I. Stephanie Boyce, ‘it is important to clarify the parameters of this kind of lawsuit. This would help ensure any remedies are sufficiently targeted and do not have unintended consequences, such as suppressing free speech or restricting access to justice.’

The focus of anti-SLAPP efforts should be on improving existing rules and procedure, Chancery Lane believes. That includes exploring methods which would ensure parties operate on a more level playing field.

Suggestions include strong gatekeeping by the judiciary to weed out spurious cases, and more rigorous costs and case management. Numerous options for limiting legal costs incurred during SLAPP litigation could be explored, says the Society. These include: an indemnity fund to help poorer parties bring or defend a case; deploying legal aid; fixing recoverable costs; assessing the readiness of the courts to allow indemnity costs; and applying qualified ‘one-way’ costs shifting to SLAPP cases. 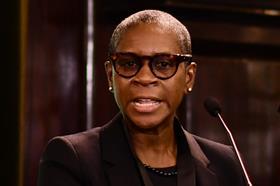 Boyce added: ‘The inequality of arms that often exists between claimant and defendant really needs to be addressed. Lower costs would benefit both parties. Wider reforms should strike the right balance between freedom of speech – particularly where matters of public interest are at stake – and the right to respect for private life, which includes the right to protection of reputation – which are conflicting elements under the European Convention of Human Rights.

In another consultation response, the Society of Editors has called for a new anti-SLAPP law ’that could introduce procedural reform across all laws used for the purpose of intimidation’. The media trade body wants to see the introduction of a merits test to allow early dismissal of cases; costs capped at an early stage to deter cases where the primary purpose is to drain the defendant’s resources; and punitive/exemplary damages and compensation awarded to SLAPP victims.

All costs should automatically be borne by the plaintiff where the case is found to be a SLAPP, it adds.

Tue May 24 , 2022
Proposed US rules causing banks to sour on SPACs are having the opposite effect on Big Law firms that see an uptick in inquiries about special purpose acquisition companies. Lawyers are advising SPACs, investors, and target companies on what the rules will mean for deals being negotiated now and those […]