As world leaders converge on Egypt for the 27th annual UN climate summit (COP27), we look at a critical risk facing businesses and governments worldwide as they set policies and make plans to transition to net zero: greenwashing.

Greenwashing mentions in the global financial press have more than doubled since January. Regulators are intensifying efforts as businesses transition to a net zero economy, fuelling a surge in interest.

So, what is greenwashing – and how can affected businesses navigate the global risks? Our experts make a complex issue simple in this explainer.

No time for the detail? Skip to the end for our Six Golden Rules for minimising risks.

Headlines about greenwashing – from regulatory crackdowns to court claims – increasingly grab our attention. So our knowledge experts went looking for data.

The data confirms the anecdotal trend: media mentions almost doubled around the globe in the first seven months of 2022. In Australia, the trend was even more marked, with mentions increasing ten-fold. We looked at Bloomberg News, Financial Times, South China Morning Post, Australian Financial Review and The Australian. Many other publications similarly report on the trend, in print and online.

This trend is unsurprising, given companies are increasingly setting carbon reduction targets and making climate-related claims for their products or services. This is part of a critically important (and laudable) shift towards a net zero economy, but there are serious risks associated with misrepresenting actions.

Regulators, investors and consumers are watching the space closely – and acting decisively where they see a misstep, whether perceived or actual. Understanding the greenwashing landscape is essential.

So, what is it? Greenwashing is a misleading claim about the environmental benefit of a product or service

When a company gives a false impression or provides misleading information about the environmental impacts of their products or services, it is greenwashing. Due to the interdisciplinary nature of greenwashing, [1] there are differing definitions and perspectives. [2]

Some take a broad approach, defining it as any communication that misleads people into adopting overly positive beliefs about an organisation’s environmental performance, practices or products. [3] Regulators around the world have their own views, as explored here and below.

Greenwashing is not itself a cause of action. Legal claims fall under existing laws and regulations.

In common law jurisdictions such as the UK, Australia and New Zealand, greenwashing claims may be framed as tortious causes of action – for example, a claim in negligent misstatement or misrepresentation or deceit.

In Australia, the general consumer protections in the Australian Consumer Law (ACL) equally apply to “green” and environmental claims and provide a more commonly used path.

In New Zealand the Fair Trading Act 1986 (FTA) similarly provides that it is illegal for businesses to mislead or deceive consumers about the goods and services they sell.

In civil law jurisdictions, greenwashing may fit within codes regulating marketing, advertisements, consumer rights, among others, as well as under contractual arrangements.

For example in China, several laws generally provide a basis for consumers, businesses, investors, or regulators to seek relief for false or misleading marketing or disclosures: the PRC Advertising Law (2021, Article 56), the Law on Protection of Consumer Rights and Interests (2013, Article 45), the Anti Unfair Competition Law (2019, Articles 8 and 17), or the Securities Law (2019, Articles 85 and 87. Claims for fraud or misrepresentation may also arise under various parts of the PRC Civil Code or the parties’ commercial contracts.

In Spain, NGOs such as Greenpeace are campaigning for the reform and the regulatory development of the General Publicity Act 34/1998 to avoid greenwashing caused by misleading advertising; publishing reports that ‘name and shame’ alleged offenders.

Greenwashing is increasingly in the spotlight today, but the concept dates back almost 40 years

The term greenwashing was first conceived in 1986 by Jay Westerveld, a biologist and environmental activist. [4] The seminal works of Greer and Bruno in 1996 increased the number of studies on the topic, [5] with substantial leaps made in 2011.

Since then, greenwashing has become an increasingly significant topic for consumers, investors, professionals and corporations. [6]

Once confined to environmental activists and advocacy groups, climate litigation is now driven by a far broader group of actors including shareholders (through material non-disclosure claims) and consumers (through class actions).

The US leads the tally for climate change litigation, followed by Australia which is the home of the world’s first claim questioning a company’s net zero target and testing the viability of carbon capture and storage.

The claim was filed in the Federal Court in 2021 by the Australian Centre for Corporate Responsibility against Santos Ltd, alleging Santos engaged in greenwashing in its 2020 Annual Report by embellishing environmental credentials in a way that is misleading or deceptive or likely to mislead or deceive.

In the US, a report revealing a number of improper accounting practices and greenwashing activities of Oatly Group was the catalyst for class action litigation currently underway. 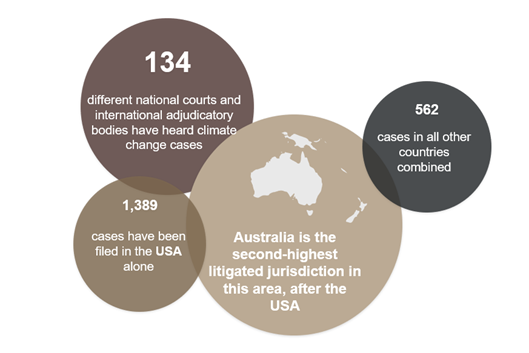 There is increasing creativity in the way legal claims are formulated against corporations and governments.

There are still risks for governments, who are the more frequent defendants.

US and Australia dominate the climate litigation space, but cases are increasingly occurring elsewhere and complaints are rising in non-litigious spaces. Global Witness, Greenpeace and Earthworks have filed a false advertising complaint against Chevron with the US Federal Trade Commission, which enforces rules against deceptive advertising.

In the UK, environmental organisation ClientEarth has sued the board of directors of Shell – all 13 executive and non-executive members. This is the first time a legal action has targeted directors for personal liability, alleging a breach of duties for failing to “properly prepare the company for net zero”.

ClientEarth was behind another frontier in the space: in 2022, it won its action against the UK government over its net zero strategy. ClientEarth argued the government had “failed to set out sufficient policies to tackle climate change and meet its legally binding carbon budgets”. On July 18, 2022, the High Court ruled in its favour. The court found the government’s strategy failed to meet legislated requirements to produce detailed policies and the public were not told about a target shortfall. The government must now update its strategy and give a realistic assessment of how its policies will achieve climate targets.

As for who is claiming, NGOs dominate in the US (claimants in almost 60% of cases) but outside of the US claimants are more often corporations as shown below. 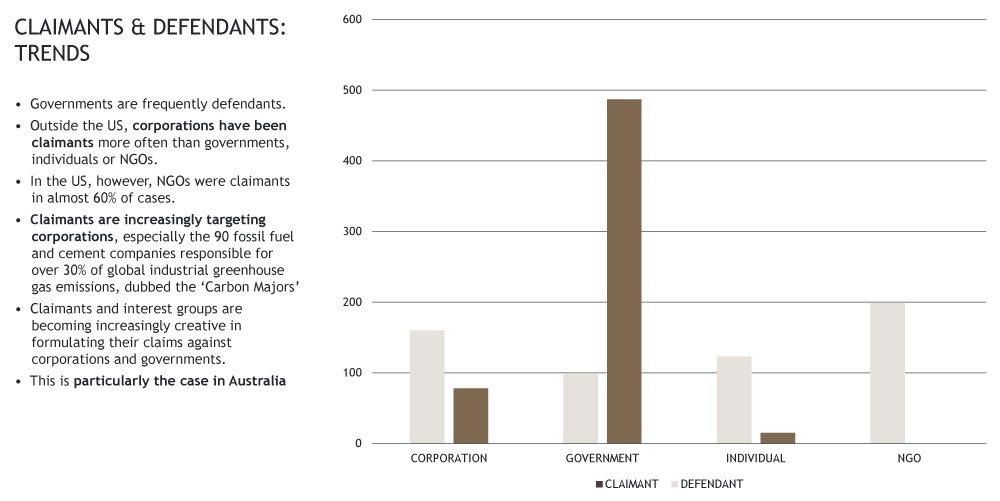 Regulators worldwide are scrutinising greenwashing – going as far as raids

European Green Deal and the fight against greenwashing

In Europe, regulatory action has gone as far as raids on corporate offices. In 2020 the European Parliament approved the first criteria to fight against greenwashing and promote advertisement transparency.

“Companies making ‘green claims’ should substantiate these against a standard methodology to assess their impact on the environment.” The European Green Deal

The European Commission has started to prioritise fighting greenwashing. In 2021, the EC claimed that 42% of the companies which offer an eco–friendly image on the internet were presumably committing greenwashing.

In Italy, the competition regulator fined Eni SpA €5 million in January 2020 for a marketing campaign claiming that its diesel was ‘green’ and helped the environment.

In Spain, companies must make non-financial documents public to provide visibility to the eco–friendly activities that they develop – including ESG and Corporate Social Responsibility Reports (under Act 11/2018 introduced 29 December 2018). However, according to experts, it does not really prevent the commission of greenwashing due to major loopholes that are due for amendment.

Guidance emerges and enforcement on the rise in the UK

In the UK, regulators are increasingly acting. The Competition & Markets Authority released detailed guidance in 2021 indicating when it intends to take action for misleading green claims. The legislation which the CMA relies on also affords a private right of redress to consumers on precisely the same grounds, meaning the UK may see a rise in aggrieved individuals taking the stand themselves. Other public bodies with enforcement powers are also clamping down:

In Australia, greenwashing is a priority area of focus for regulators

While the topic is a focus area today, regulatory attention came as early as 2008. That year, the competition regulator (ACCC) published an issues paper, ‘The Trade Practices Act and carbon offset claims’ and issued updated guidance on the use of general environmental claims in marketing.[vii] The AANA also published its Environmental Claims Code. Three years later, in 2011, the ACCC published its green marketing guide and has acted against a number of companies across various sectors since.

In China, there are risks associated with the increasing number of ‘green’ claims

There are increasing disclosure obligations related to climate change, most recently:

With the increased pressure placed on companies to make climate-related statements and disclosures, there are now more opportunities for consumers and investors to review a company’s impact on the climate crisis. Companies also face competitive pressure to demonstrate they are addressing their impact on climate change.

In addition to the avoidance advice by ASIC, guidance provided by the New Zealand Commerce Commission guidelines and the New Zealand Advertising Standards Authority Code provide useful general principles for businesses to consider when they are making claims about the environmental impact of products and services.

Actions businesses can take include:

Where a company makes statements about climate change policies or net zero commitments, it is important that any assumptions and explanations are documented as part of the process of developing those strategies.

We have encapsulated this in our Six Golden Rules for green claims (set out in more detail here): 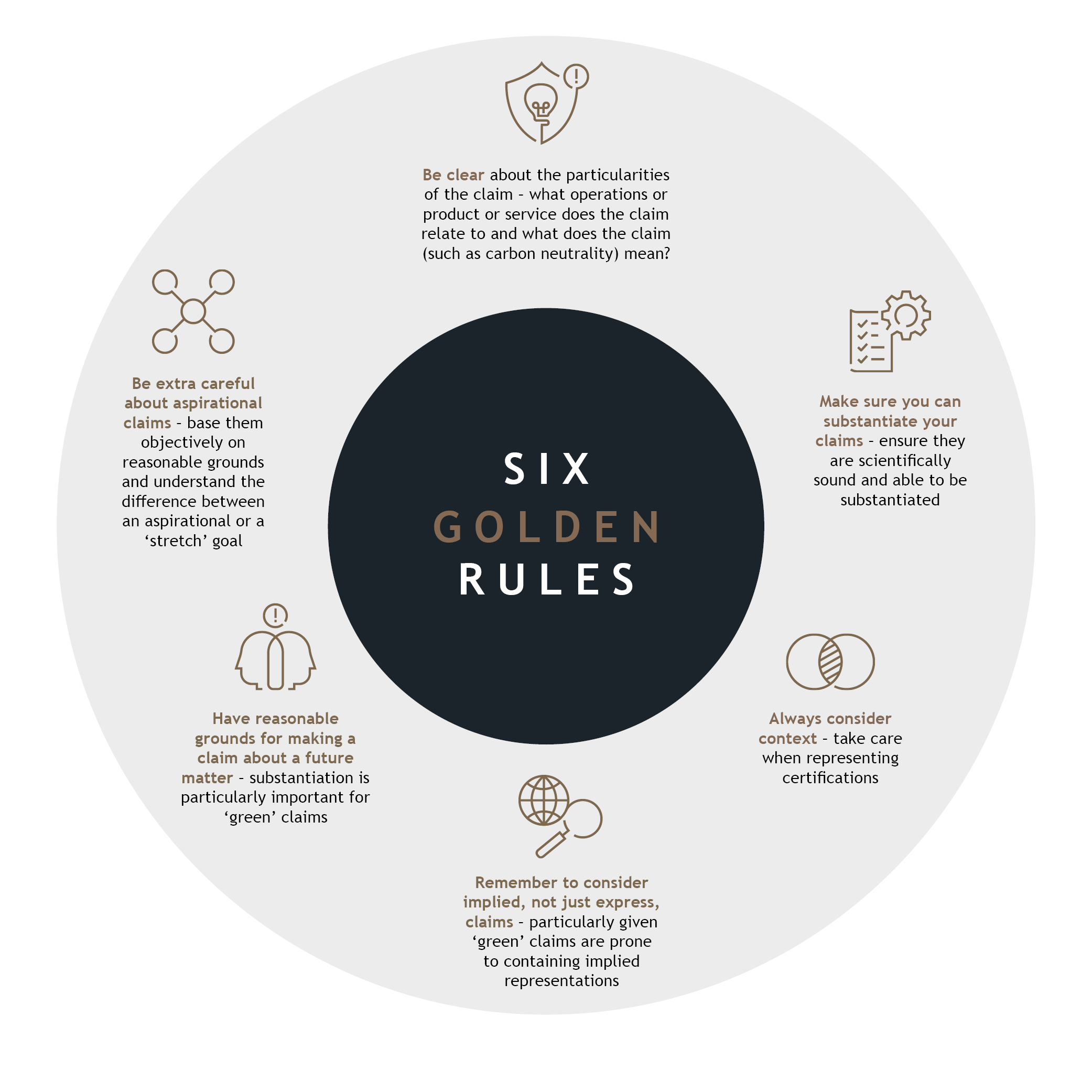 FUN FACT – IS THERE A CORRELATION BETWEEN BOARD SIZE AND GREENWASHING?!

One study has shown companies with larger boards are less prone to greenwashing behaviours. [7] Boards can actively review whether statements are open to misinterpretation, too generalised, or based on unreasonable grounds, as well review any changes in circumstances that might affect underlying truth.