Gov. Kathy Hochul on Thursday vowed to further roll back parts of the state’s controversial criminal justice reform law — including closing the “Raise the Age” loophole and giving judges more discretion in setting bail in cases.

The measures, stemming from negotiations between the governor and state lawmakers and unveiled as part of Hochul’s $220 billion budget plan, will also stiffen gun-trafficking laws and allow more repeat offenders to be held in jail.

“We’re not here to undo the progress that was made in the past,” Hochul said from the Capitol. “Never been my objective. Never will be.

“But I also said we have to realize there are areas where improvements can and need to be made,” she continued.

“And so to New Yorkers who are concerned about the rise in crime, we have put forth a comprehensive package that, again, continues the progress we’ve made in the past to make sure our criminal justice system is fair and we’re not moving backwards. We are moving forward with a thoughtful approach.”

The proposals will close loopholes in the “Raise the Age” law to hold more defendants under 18 accountable and target repeat offenders who would not have been jailed under the 2019 soft-on-crime reforms — particularly in gun cases.

“We are now for the first time going to allow judges to set bail for gun charges that were previously subject only to release,” Hochul said. “Also adding factors that a judge must consider.

“We’re also going to be looking at the bail and arrest eligibility for repeat offenders and any crimes, repeat offenses, with harm to a person or property,” she said. “Repeat offenses for property theft, with limited exceptions for crimes of poverty. Close the desk appearance loophole which exists right now.”

The new moves will also tweak the state’s speedy trial reforms which set strict timelines on prosecutors to produce “discovery” — evidence that must be turned over to the defense.

In a March 22 report, The Post revealed that the statute was forcing prosecutors to dismiss cases prematurely because of the stringent requirements and prompting dozens of them to quit their jobs.

The measures come in the wake of a backlash from local officials and law enforcement — including Mayor Eric Adams, who last month dispatched top aides to Albany to lobby lawmakers for the changes.

The 2019 reforms prohibited judges from setting bail on misdemeanor and many non-violent felony cases — leading to an outcry from state police officials who said the law let too many violent criminals back on the streets.

“We need judges to hold people accountable, give them back the power to do that,” former Bronx prosecutor Michael Disciarro told The Post Thursday. “We’ve seen the other way. It doesn’t work.

“What we’re doing now doesn’t work in the streets.”

Asked about the governor’s proposals, Lucian Chalfen, spokesman for the state Office of Court Administration, said simply that “judges will follow the law.

“And should these changes become law, judges will consider those changes at a defendant’s arraignment,” he said.

But others weren’t buying the changes.

“That’s a little too little, a little too late,” said former NYPD Det. Joseph Giacalone, now a professor at the John Jay College of Criminal Justice.

“The damage is done,” he said. “There are too many politicians in New York that have gaslighted us for so long about the surge in violence.

“This also all means nothing if DA’s continue to not prosecute or downgrade offenses,” Giacalone added.

One law enforcement source said he was skeptical and didn’t trust the governor’s motivations.

“It’s not enough,” the source said. “She is just trying to pacify her critics while not upsetting the progressives. She wants her cake and eat it too.”

Said another source, “I think bail reform was needed, but instead of implementing common-sense reforms, legislators swung the pendulum too far in the opposite direction.

“Now they have their tail between their legs,” he said.

Rep. Tom Suozzi, Hochul’s rival in the June Democratic primary for governor, said her reform plan “will not work.”

“Hochul cut a weak political deal to have a talking point instead of standing up to the legislature and fixing bail reform,” he said.

“By refusing to give judges the power to consider dangerousness and keep criminals off our streets, Hochul failed another test of leadership during this crime crisis.”

In a statement Thursday, US Rep. Elise Stefanik, an upstate Republican, chided Hochul for falling short on criminal justice despite producing “the most expensive budget” in state history.

“New York communities are suffering because of failed policies from Albany, and Kathy Hochul has only proven she is committed to making them worse,” she said. “She is failing all New Yorkers.”

Mon Apr 18 , 2022
Getting ready for the SWLA Law Center’s return of Barrister’s Bingo on Thursday, May 5, at the Pioneer Club are, from left, Mark Judson, Law Center executive director; Pioneer Club legends Lannie Williams, with 30-plus years on staff and Betty Bertrand with 40-plus years; Alexius Williams, Law Center board chair-elect; […] 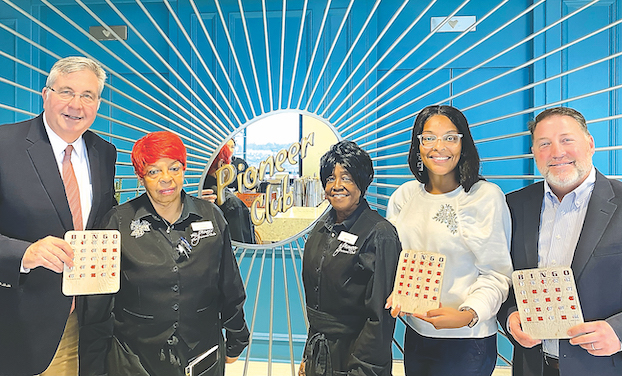