Hong Kong’s reputation as an international financial centre has been damaged by the resignation of two UK judges from the city’s top court, senior businesspeople and lawyers have warned.

The Chinese territory’s common law legal system, which it shares with the UK, distinguishes it from mainland China, where the ruling Communist party plays a direct role in the country’s courts.

The city’s legal system offered reassurance to Hong Kong-based foreign companies that the courts were free of political interference and a guarantee of the ability to enforce contracts against Chinese state-owned enterprises.

But the territory’s government has used the introduction of a tough national security law almost two years ago to enforce a broad crackdown on civil freedoms promised to Hong Kongers after the handover from the UK to China in 1997.

“The judges of the Supreme Court cannot continue to sit in Hong Kong without appearing to endorse an administration which has departed from values of political freedom and freedom of expression,” said Lord Reed.

Lord Nick Phillips, Lord Leonard Hoffmann, Lord David Neuberger, Lord Lawrence Collins and Lord Jonathan Sumption, retired UK judges who sit on the Hong Kong court, said in a joint statement that they would remain, along with their Australian, Canadian and local colleagues.

Senior figures in Hong Kong’s legal and business community said that while the presence of foreign judges on the court mitigated the effect of the resignations, there was no doubt that its reputation would suffer.

“Many business people are concerned about the remaining judges’ decisions, if all judges go away, there is [a risk] to prudent common law management and that affects Japanese businesses,” said Masakazu Yagyu, secretary-general of the Hong Kong Japanese Chamber of Commerce and Industry.

Despite the remaining foreign judges, Yagyu feared “a misinterpretation that Hong Kong’s common law is ending” would be the message business leaders back in Japan heard.

Hong Kong’s image among foreign companies has already been damaged over the past two years as the territory was forced to fall in line with Beijing’s tough pandemic policies, which effectively closed its borders to the mainland and the rest of the world.

A local banker said that from the financial market point of view, the effect of the judges’ withdrawal was a matter of perception “rather than the immediate effect of erosion on Hong Kong’s judicial system” that could lower confidence among international investors. “And the perception has indeed become worse,” the banker added.

The British Chamber of Commerce in Hong Kong called on the remaining foreign judges to stay, adding that they were “greatly valued” by business and insisting the opportunities in the Chinese territory “remain very significant”.

After the vaguely worded security law was introduced in 2020, Hong Kong’s political system, educational institutions and civil society were overhauled to expel anyone disloyal to Beijing.

More alarming for lawyers was the use of threats, arrests and prosecutions to intimidate those seen as sympathetic to the 2019 anti-government protest movement. Forty-seven opposition activists were arrested in dawn raids in early 2021. Most are still in jail waiting for their cases to be tried.

While the foreign non-permanent judges were highly unlikely to have sat on a security law case, campaigners such as the UK’s Baroness Helena Kennedy argued they had given a veneer of respectability to the authorities’ actions. “The senior courts will increasingly be expected to dance to the tune of China,” she said.

A senior legal figure said the UK supreme court judges would have wanted to avoid appearing party to potentially embarrassing rulings by their Hong Kong colleagues in national security cases. “I’m a little surprised they have stayed as long as they have,” the person said.

Such a view, however, was rejected by many in Hong Kong’s legal community, where the resignations have been met with dismay. “I am personally devastated . . . Someone has just taken a giant sledgehammer to the value of Hong Kong law,” a commercial solicitor said.

The legal community argued that the judges’ exits removed the final barrier protecting ordinary Hong Kongers from the mainland’s influence. “Why not stay along with your colleagues who you deem to be independent and fight the good fight,” a leading local barrister asked. 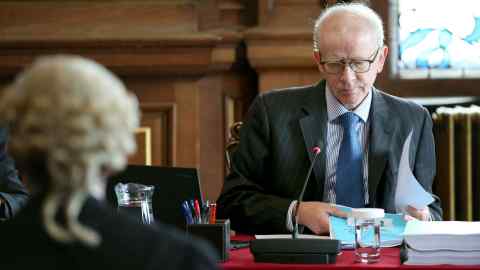 Hong Kong officials accused the UK government of political interference in its judiciary after the judges’ announcement was applauded by Liz Truss, UK foreign secretary.

Beijing’s hardliners, however, have also seized on the resignations as an opportunity. “The pulling out of judges . . . will only further minimise Britain’s interests and influence in Hong Kong,” said Tian Feilong, from the Chinese Association of Hong Kong and Macau Studies, a semi-official think-tank. Lau Siu-kai, his colleague, said it was a chance for Hong Kong to develop a judicial system with national security as a priority.

“It’s another step down the slippery slope,” a top commercial lawyer moaned. “It can’t be helpful . . . [but] a lot of the damage is already done.”