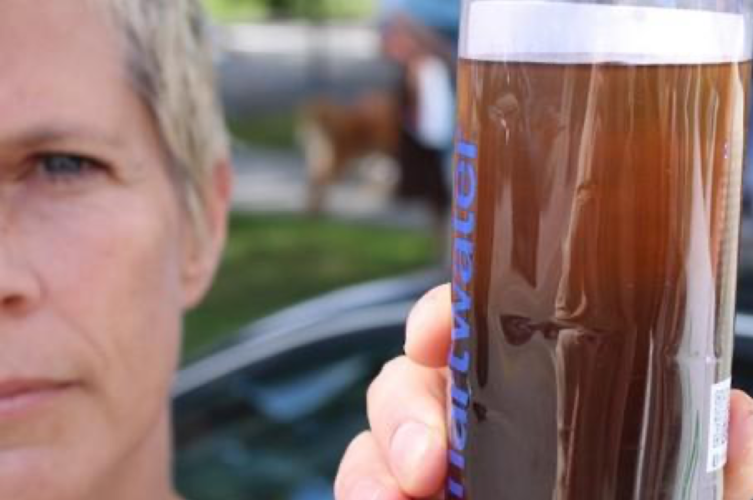 Housatonic Water Works customer Jody Brandt holding a sample of water from her faucet during a protest of the company In September. Brandt was one of many customers at the protest. Photo by Shaw Israel Izikson.

Housatonic — After raising funds, Housatonic Clean Water Alliance member Debra Herman has hired an attorney in regards to the ongoing controversy over the Housatonic Water Works.

In an email on Thursday, November 3, Herman wrote, “After a successful fund-raising campaign, the Housatonic Clean Water Alliance has engaged the services of the Boston law firm of McGregor Legere and Stevens PC.”

However, in an interview with The Berkshire Edge on Friday, November 4, Herman said that the law firm is representing herself and not the group. “I am the person who signed the agreement with the attorney and I’m responsible for all the fees,” Herman said. “The Clean Water Alliance is a very informal organization. There is no formal membership. It turns out this is the simplest way of doing this. Somebody had to take responsibility for the financial aspect of this. The lawyer will only talk to one person for reasons of efficiency. It’s on behalf of the community, even though technically it’s me.”

When asked what role she takes in the organization, Herman said, “I don’t have a title. If you can just simply say that I’m the person to contact, because it’s not really a formal organization.” She continued, “That’s why if you saw the contract with the lawyer, it says my name on it. It’s an informal community organization dedicated to trying to improve the water quality and trying to deal with the problems created by [Housatonic Water Works’] failure to provide us with good water for many years.”

Herman said that she did not know how many members the organization had. She also asked The Berkshire Edge to not put in the financial amount of how much the organization raised for Herman to hire the attorney. “My intent [in hiring the attorney] is to accelerate or to pressure the parties that are involved in the water situation in Housatonic to improve our water and to get us clean water,” she said. “Also, recently I’ve become concerned about the fire hydrants possibly not having sufficient flow to fight a fire adequately. I just want to see an improved situation for customers, and clean water coming out of everyone’s pipes.”

When asked about what the legal firm intends on doing for her, she stated, “I can’t say specifically what the legal strategy is going to be, because that’s confidential.” She explained, “But the goal is to use whatever powers the law has to push those who are responsible for the fact that we have terrible water … This is not just for me. There are many people behind me.”