Just when you couldn’t believe the jaw-droppingly racist ‘Moana’ Oranga Tamariki case could get any worse.

But the Law Society made no such urging, and that has not gone down well with some of its members, including the Wellington branch.

Palmer and the others are members of the Law Society’s “Rule of Law Committee”, and late last year they considered a potential rule of law issue involving alleged inappropriate judicial conduct.

…where the Christ does one even begin with this alarming insight into how our State Agencies are abusing people for the wokest of justifications!

To fully appreciate the clusterfuck this has become, let me remind you all why you should be outraged with this ‘Moana’ case.

The entire Labour Party Cabinet should be on their knees thanking God that the looming economic meltdown is distracting the attention of almost every Kiwi because if we weren’t so distracted, the genuine anger at what is happening inside Oranga Tamariki would be an all encompassing furnace of outrage.

The enormity of the late Sir Wira Gardiner’s extraordinary overreach by contacting two judges and attempting to intervene in an ongoing trial, ostensibly for grilling a Social Worker too harshly, is just so gasp inducing in its audacity that it steps over the line to become unacceptable.

I have called for a very long time for Māori providers to take over Oranga Tamariki because I believe Tikanga values are far more healing and beneficial to all vulnerable children than the hollow costed values of our neoliberal welfare system that sees clients of their services as opposed to children in need.

However, what is happening here in Oranga Tamariki IS NOT tikanga, it is woke critical race theory the dogma of which declares no white family can give a brown child a good life.

By attempting to disrupt and influence an ongoing investigation into Oranga Tamariki taking back Māori children from a white family when that testimony is so egregiously damming of Oranga Tamariki, is an attempt to not only corrupt independent justice, but also hide the appallingly racist behaviour of a State agency using the most extreme powers a State has, that of uplifting children from parents and step-parents.

If your position is attempting to shut down a trial because too many truths and facts are coming out, isn’t that a tad on you?

Let’s remind ourselves of the lies, so many lies that the Social Worker used to justify psychologically harming a young Maori girl because you know, the heteronormative white cis male patriarchy…

There were some early signs, however, that the social worker might be out of her depth. The review filed in November 2018 said Moana had a close relationship with her grandfather. It transpired her grandfather had died five months earlier.

And while Social Worker 1 was filing these glowing reports, she was telling others in her office that the Smiths were stripping Moana of her Māori identity. She said she felt “incessantly undermined” by the Smiths and said the couple “attempted to sabotage whānau access” for Moana.

She pointed to the Smith’s “disregard for Te Ao Māori” (the Māori world view), and said they were incapable of providing Moana with the “cultural aspects” she needed.

The Smiths had no idea these conversations were taking place.

When she was asked in court why she didn’t include these concerns in her reviews, Social Worker 1 said she did but was told to remove them by her supervisor. (The supervisor would later deny this under oath, and said any changes he made were only grammatical).

Among the social worker’s concerns was an allegation that the Smiths had asked Moana’s daycare centre to refer to her by her nickname (an abbreviation of her name). This was “an attempt to remove her from her identity”, she said.

Social Worker 1 said the Smiths raised issues about Moana’s behaviour following access visits with her birth mother, and she saw this as the Smiths “making up issues to try and get reasons to have no contact”.

Another allegation concerned an access visit with Moana’s birth mother. Social Worker 1 claimed Mrs Smith pulled Moana away from hugging her birth mother and “proceeded to wipe her down with a cloth in what looked like an attempt to remove any germs”. She did not ask Mrs Smith what she was doing, but passed her concerns on to other Oranga Tamariki staff.

(Mrs Smith would later say Moana and her birth mother were not embracing each other, and she had used a wet wipe to clean Vegemite from Moana’s hands).

Separately, the Smiths held their own concerns about the social worker, and in May 2019 they complained to her supervisor.

A few weeks later the Smiths were informed that there were concerns around their attendance at access visits and the couple would need to undergo a cultural assessment. The couple were surprised about this and asked why it was required and what it involved.

Oranga Tamariki staff told the Smiths it was very rare – some had never been involved in one – and they were unable to provide any detail on the process or guidelines of such an assessment.

A meeting was held in late June 2019 in which the Smiths were told that Oranga Tamariki was concerned about their ability to provide for Moana’s cultural needs. The supervisor told the Smiths the cultural assessment would acknowledge “the good work you are already doing to promote [Moana’s] cultural identity”, and would hopefully provide some detail around Moana’s whakapapa.

When the Smiths asked why other Pākehā caregivers with Māori children were not subject to the same assessments, the supervisor responded that it was a good question, and all he could say was that there had been issues around access.

The supervisor couldn’t provide any brochures or pamphlets for the Smiths to inform them of what a cultural assessment involved. (The supervisor would later give evidence saying he felt the Smiths may have been directing “unconscious racism” towards Social Worker 1).

The Smiths believed the assessment was a ruse being used by the Ministry as a way to find them unsuitable and to have Moana removed from their care. They refused to take part.

The assessment was conducted by an independent cultural expert. His original task had been to assess the Smiths’ understanding of Te Ao Maori and their ability to provide Moana’s cultural needs, but that changed when the Smiths said they would not take part in the assessment, and he ended up looking solely at Moana.

His report was provided to Oranga Tamariki on September 11, 2019. It included scant information on Moana’s whakapapa, other than noting she had a distant relation in Taranaki.

The assessor, later giving evidence in court, would say a Māori child growing up in a non-Maori family would “not have the same opportunity in terms of inculcation of values,” he said.

He said it would be “extremely challenging” for a non-Māori family to raise a Māori child in the correct cultural manner, and failing to provide for cultural needs could result in a child’s health being compromised later in life. He said the decision on where Moana should be placed should lie with Ngāti Kahungunu.

…The ‘assessor’ uses critical race theory to deduce that this child will do worse with white parents, which seems an extremely limited view to judge this case on!

Look, if Oranga Tamariki can find whanau to place a Māori child with at the point of uplifting a child – all fine and dandy.

The recent involvement of Iwi stepping in to be that whanau resource at the point of uplift is a great development but that’s not what’s happened here.

In this case, as with many others, the Māori child has been placed with a white family for years and told they are staying with that white family permanently, to rip a child from the bandages of emotional healing and sense of security for some dogmatic implementation of woke critical race theory is the kind of zealotry that burns books!

The Judge didn’t bully this testimony out of Oranga Tamariki, and even if he did, what has been exposed is so damning that it justified bullying.

To attempt to intervene in the sacrosanctness of our independent judiciary so racist practices by Oranga Tamariki can be hidden is so disbelievingly outside the norms of our system it’s almost a Donald Trump level molestation of due process.

This case mattered because it’s a test case for a whole bunch of these reverse uplifts by Oranga Tamariki. In another case, Oranga Tamariki have gagged Newsroom and other media covering the case of 4 Māori children who were placed with a white step-family for 4 years and told it was a ‘forever home’. The white step parents sold their home and bought a bigger house so the kids could have their own rooms only to have the exact same woke critical race theory ban them from having the 4 children despite being told they were.

If dogma is trumping the actual welfare of children, we have entered a quasi religious belief system as social policy stage and the Identity Politics Left have to be taken harshly to task for such egregious conclusions! 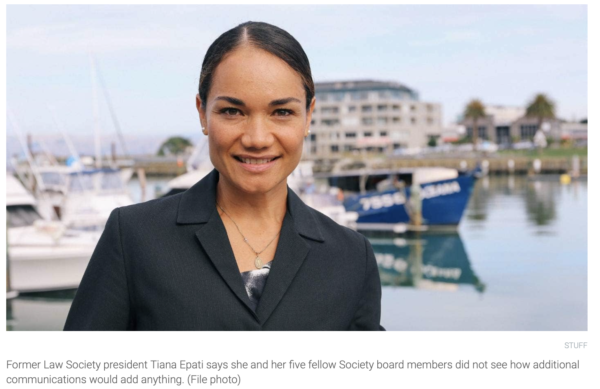 How former Law Society president Tiana Epati came to the conclusion that a damning report written by Sir Geoffrey Palmer, several QCs and various law professors didn’t add anything to a debate where Oranga Tamariki were intervening in a Judge because his questioning of an OT staff member was devastating for a test case they were building is a tad beyond me.

This case just keeps highlighting very questionable woke dogma that is forever critiquing the world through an identity lens.

That’s pretty much where we are now philosophically in this country.

A tribal allegiance to our skin colour, gender and orientation above any common ground or shared values whatsoever is who we are now, none of which helps the welfare of that little girl who has gotten caught up in an insane ideological tug of war between state departments trying o throw their weight around!

Increasingly having independent opinion in a mainstream media environment which mostly echo one another has become more important than ever, so if you value having an independent voice – please donate here.

If you can’t contribute but want to help, please always feel free to share our blogs on social media