WASHINGTON — The leaders of the House committee investigating the Capitol attack have grown divided over whether to make a criminal referral to the Justice Department of former President Donald J. Trump, even though they have concluded that they have enough evidence to do so, people involved in the discussions said.

The debate centers on whether making a referral — a largely symbolic act — would backfire by politically tainting the Justice Department’s expanding investigation into the Jan. 6 assault and what led up to it.

Since last summer, a team of former federal prosecutors working for the committee has focused on documenting the attack and the preceding efforts by Mr. Trump and his allies to reverse his defeat in the 2020 election. The panel plans to issue a detailed report on its findings, but in recent months it has regularly signaled that it was also weighing a criminal referral that would pressure Attorney General Merrick B. Garland to open a criminal investigation into Mr. Trump.

Despite concluding that they have enough evidence to refer Mr. Trump for obstructing a congressional proceeding and conspiring to defraud the American people, some on the committee are questioning whether there is any need to make a referral. The Justice Department appears to be ramping up a wide-ranging investigation, and making a referral could saddle a criminal case with further partisan baggage at a time when Mr. Trump is openly flirting with running again in 2024.

The committee’s vice chairwoman, Representative Liz Cheney, said on CNN on Sunday that the committee had not reached a final decision about making referrals and downplayed any divisions on the committee, but acknowledged there was significant evidence of criminality.

“I think that it is absolutely the case, it’s absolutely clear that what President Trump was doing, what a number of people around him were doing, that they knew it was unlawful. They did it anyway,” said Ms. Cheney, a Wyoming Republican.

The shift in committee leaders’ perspective on making a referral was prompted in part by a ruling two weeks ago by Judge David O. Carter of the Federal District Court for Central California. Deciding a civil case in which the committee had sought access to more than 100 emails written by John C. Eastman, a lawyer who advised Mr. Trump on efforts to derail certification of the Electoral College outcome, Judge Carter found that it was “more likely than not” that Mr. Trump and Mr. Eastman had committed federal crimes.

The ruling led some committee and staff members to argue that even though they felt they had amassed enough evidence to justify calling for a prosecution, the judge’s decision would carry far greater weight with Mr. Garland than any referral letter they could write, according to people with knowledge of the conversations.

The members and aides who were reluctant to support a referral contended that making one would create the appearance that Mr. Garland was investigating Mr. Trump at the behest of a Democratic Congress and that if the committee could avoid that perception it should, the people said.

Even if the final report does not include a specific referral letter to Mr. Garland, the findings would still provide federal prosecutors with the evidence the committee uncovered — including some that has not yet become public — that could be used as a road map for any prosecution, the people said.

“If you read his decision, I think it’s quite telling,” Representative Zoe Lofgren, Democrat of California and a member of the committee, said of Judge Carter’s ruling. “He and we have reviewed a huge amount of documents, and he reached a conclusion that he outlined in very stark terms.”

Ms. Lofgren is among those who believe a referral letter to the Justice Department is superfluous, since it would carry no legal weight.

“Maybe we will, maybe we won’t,” she said of a referral. “It doesn’t have a legal impact.”

But the question about whether to send the referral has, for one of the first times since the committee was formed in July, exposed differences among members.

Representative Elaine Luria, Democrat of Virginia and a member of the panel, said that the committee should still send a referral for any crimes it uncovers.

“I would say that I don’t agree with what some of my colleagues have said about this,” Ms. Luria said on MSNBC this month. “I think it’s a lot more important to do what’s right than it is to worry about the political ramifications. This committee, our purpose is legislative and oversight, but if in the course of our investigation we find that criminal activity has occurred, I think it’s our responsibility to refer that to the Department of Justice.”

Ms. Cheney portrayed any divisions as minor and said the panel would work collaboratively and reach a consensus agreement.

“I’m confident we will work to come to agreement,” she said.

Although staff members have been in discussions about a referral, and some have debated the matter publicly, the committee members have not sat down together to discuss whether to proceed with a referral, several lawmakers said.

Representative Pete Aguilar, Democrat of California, said the committee was likely to hold off on making a final determination until investigators finished their work. He said the panel was “finishing up” its investigative phase and shifting to a more “public facing” one in which the panel will present its findings.

“The members haven’t had those conversations,” Mr. Aguilar said of a meeting to discuss a potential referral. “Right now, we’re gathering the material that we need. As the investigative phase winds down, we’ll have more conversations about what the report looks like. But we’re not presupposing where that’s going to go before we get a little further with the interviews.”

Although the committee has the ability to subpoena testimony and documents and make referrals to the Justice Department for prosecutions, it has no criminal prosecution powers.

Ms. Cheney singled out Mr. Trump’s conduct at a public hearing in December, reading from the criminal code and laying out how she believed he had obstructed Congress.

In early March, the committee in effect road-tested whether the evidence it had gathered could support a prosecution, laying out in a filing in the civil case before Judge Carter its position that Mr. Trump and Mr. Eastman had obstructed Congress and defrauded the American public.

Debating a criminal referral. The Jan. 6 House committee has grown divided over whether to make a criminal referral to the Justice Department of former President Donald J. Trump, even though it has concluded that it has enough evidence to do so. The debate centers on whether a referral would backfire by politically tainting the expanding federal investigation.

A Trump ally agrees to cooperate. Ali Alexander, a prominent organizer of pro-Trump events after the 2020 election, has agreed to cooperate with the Justice Department’s newly expanded investigation of the attack on the Capitol last year.

The effort to disqualify “insurrectionists.” New lawsuits were filed against three Arizona officials, including Representatives Paul Gosar and Andy Biggs, to bar them from office under the 14th Amendment. This is part of a larger legal effort to disqualify G.O.P. lawmakers from re-election if they participated in events surrounding the Jan. 6 attack.

In validating the committee’s position, legal experts said, the judge made it difficult for the Justice Department to avoid an investigation. Mr. Garland has given no public indication of the department’s intentions other than to say that it will follow the facts and the law. But subpoenas issued by a federal grand jury indicate that prosecutors are gathering information about a wide array of issues, including about efforts to obstruct the election certification by people in the Trump White House and in Congress.

Investigators from the House committee and the Justice Department have not been sharing information, except to avoid conflicts around the scheduling of certain witnesses.

“We want them to move faster, but we respect their work,” Mr. Aguilar said, adding that the committee has a different goal than the Justice Department’s inquiry: to fully investigate what led to the riot, which injured more than 150 police officers, and take legislative steps to prevent a repeat. “It’s an insult to the lives of the Capitol Police officers if we don’t pursue what happened and take meaningful and concrete steps to ensure that it doesn’t happen again.”

Aside from the question of whether to make a referral about Mr. Trump, the committee has moved aggressively to use the Justice Department to ensure that witnesses cooperate with its investigation. The committee has made criminal referrals against four Trump White House officials for their refusal to sit for questioning or hand over documents, accusing them of contempt of Congress. But the Justice Department has charged only one — Stephen K. Bannon — frustrating the committee.

Those frustrations played out in public at a hearing this month, when Ms. Lofgren said: “This committee is doing its job. The Department of Justice needs to do theirs.”

Ms. Lofgren said she had not planned to make the remarks, but as she sat on the dais during the hearing, she decided to veer from her planned remarks because the department’s slowness in addressing the contempt referrals ate at her.

“Some of us did express some frustration. I’m among them,” she said. “Honestly, I hadn’t planned to say that. It wasn’t my script. It wasn’t there. But I thought, you know, this is frustrating. I just decided to say it.”

Trying to pressure the Justice Department to prosecute a contempt of Congress charge is more appropriate than other criminal referrals, Ms. Lofgren argued.

The committee is preparing to hold public hearings in May and June, and to make a final report in September.

After interviewing more than 800 witnesses — including more than a dozen Trump White House officials — the panel has another 100 interviews lined up, including some witnesses it wants to bring in a second time. Among those scheduled to testify soon is Stephen Miller, a former White House adviser to Mr. Trump, who the committee says helped spread false claims of voter fraud in the election and encouraged state legislatures to appoint alternate slates of electors in an effort to invalidate Joseph R. Biden Jr.’s victory.

Mr. Miller has sued to block the committee from gaining access to his phone records, arguing in part that the panel was invading his parents’ privacy since he was on their family plan.

The committee is still deciding whether to call some key witnesses, including Mr. Trump, Vice President Mike Pence and Virginia Thomas, the wife of Justice Clarence Thomas, who urged Mark Meadows, the White House chief of staff at the time, to work to keep Mr. Trump in office.

“We have completed a substantial amount of work,” Ms. Lofgren said. “We’re going to accomplish — we hope — what we set out to do, which is to tell the entire story of what happened, the events of the 6th and the events that led up to the day.”

Fri Apr 15 , 2022
In 2020, MPs probing an area of English law that allows anyone to try to prosecute whomever they want made an unsettling discovery. At the time, no one was keeping a record of how many “private prosecutions” were being brought. Such black holes of information are common in English law. […] 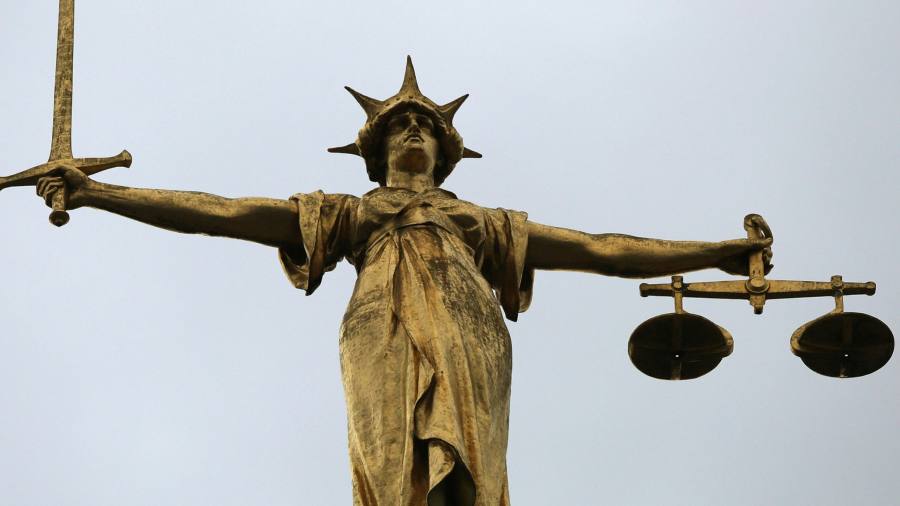