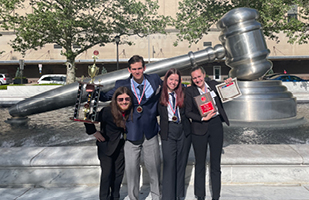 For the first time, the state moot court final featured two teams from the same school.

Upper Arlington High School’s victory also elevated it as the first school in the state to win the mock appellate court competition in back-to-back years.

“It was surreal because, the night before, the same two sides were arguing against each other in practice,” said Adele Vergis, an Upper Arlington social studies teacher who coaches the school’s moot court and mock trial programs.

The event – run by the Ohio Center for Law-Related Education and co-sponsored by the Supreme Court of Ohio – was held in Columbus at the Thomas J. Moyer Ohio Judicial Center. Upper Arlington and Springfield High School are the only multiple-time winner since moot court began in 2014.

The competition gives students the opportunity to present a simulated oral argument and respond to questions posed by a panel of volunteer judges. Arguments are evaluated on the application of the law to the facts of the case. Among this year’s judges was Supreme Court Justice Jennifer Brunner.

“It’s not every day you get to have a Supreme Court justice ask you questions,” said Vergis. “It’s something the students are going to remember forever.”

Justice Brunner, who has served on the common pleas, court of appeals, and state court bench, was impressed by the insight and presence of the competitors.

“With what I saw displayed by these students, we have a lot to be hopeful for in the legal profession,” said Justice Brunner, who sees moot court as a valuable experience for teenagers to better understand the court system and “the value of the system of the rule of law.”

One of those beneficiaries is Matthew Doron. The Upper Arlington junior was named the top petitioner – an attorney arguing for a lower-court ruling to be overturned. He participated in mock trial for years before his coach, Vergis, recommended he try moot court, as well.

“We’re always being pushed to think about new things in different ways as a team and individuals,” said Doron, whose moot court experience has inspired his career path to become a public defender.

Along with learning how to present constitutional arguments, moot court gives students their first chance at legal writing. Participants compose a brief – a written statement – that explains legal or factual positions in a case. Those arguments are reviewed and scored by volunteer attorneys. By focusing on the relevance of constitutional law to current legal issues, students get the opportunity to strengthen critical thinking skills and increase their understanding of the federal and state constitutions and the judicial system.

This year’s moot court case focused on balancing public safety with the individual right to be free from unreasonable searches, as protected by the U.S. Constitution’s Fourth Amendment. The case questioned whether an 18-year-old student can have her bag searched by law enforcement after an anonymous person in a crowd shouts an accusation that the teen has a weapon.

Preparation for moot court also provides other benefits that can be applied to other professions and life situations – such as public speaking and increasing confidence.

Eliza Wunderlich, one of the winning students, credits the heightened stakes of presenting before legal professionals as a test of poise and thinking under pressure.

“Something about the situation gives you the bit of confidence that, ‘I’m here. I’m going to argue, and no matter how it turns out, I’m just going to give my best,’” Wunderlich said.

Thu May 26 , 2022
Two years ago, the murder of George Floyd exposed for many what Black and Brown communities have long known and experienced — that we must do more to ensure that our Nation lives up to its founding promise of fair and impartial justice for all. The incident sparked one of […]